Pasta and Burrata the Perfect Match 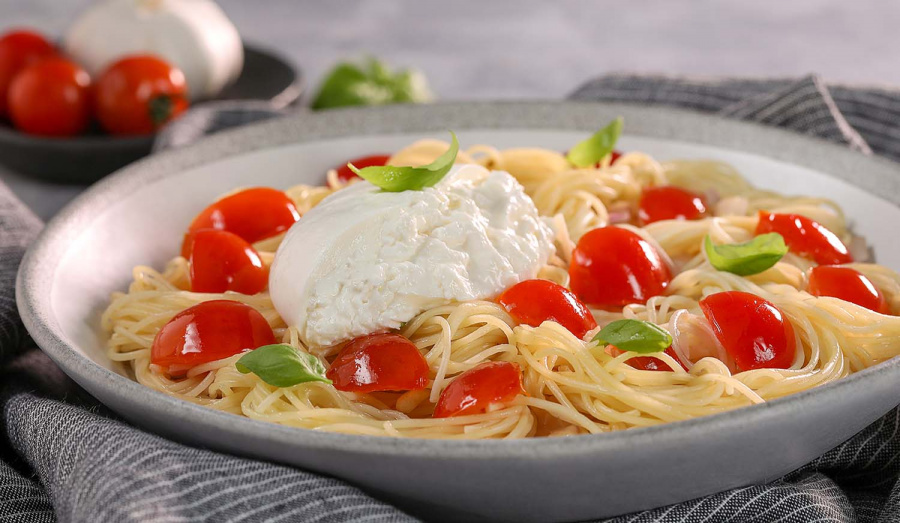 Burrata is the less-known better version of mozzarella. It is made from mozzarella and cream, giving it a very smooth and soft texture. It has origins dating back to about 1900 and hails from the Apulian region in Italy. It was initially established as an artisanal cheese but has maintained its premium-product status even after it has begun to be made commercially in factories.

In comparison to mozzarella, Burrata is more expensive, hence why it features much less in recipes. However, it is a cheese that is bursting with flavour due to its creamy interior – giving smooth velvety textures to the palate to explore once eaten. It makes for the best accompaniment to fresh pasta or used in pasta dishes itself as an integral ingredient.

Did you know that Burrata goes well with many pasta dishes and is used as a topping for pizza too? Including this cheese results in meals packed with flavour that are incredibly comforting. I tis usually served with tomatoes and basil and is a decadent & delicious topping. Have you had burrata cheese with pasta before?

We are giving you two tasty recipes that you can make using Perfetto pasta and Burrata cheese. It is the best way to pasta Burrata! Try our recipes; they will make your mealtimes at home a little fancier and more unique.

1.Cook the pasta by following the instructions written on the pack. Drain well and set aside.

2.To prepare bruschetta sauce, put cherry tomatoes, garlic, onion, olive oil and basil in a bowl. Sprinkle with salt and pepper to taste. Leave to marinade.

3.Add the cooked pasta to bruschetta bowl and fold it to combine.

4.Serve into two bowls and top with half a ball of bruschetta each. Drizzle with some additional olive oil.

1.Cook pasta as written on the pack. Reserve 1 cup of pasta water then drain well the pasta and set aside.

2.In a large frying pan on medium-low heat, cook garlic for 1 minute or until golden.

3.Increase heat to medium-high. Add mushrooms, salt and pepper and stir to wilt.

5.Transfer to a serving platter & garnish with remaining parsley.